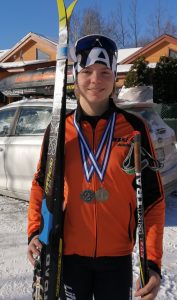 Anna has been skiing since she could stay on her feet. According to her her focus has and always will be on skiing. She competes in many other sports such as running and biking, these she does more competitively than others. She participates in many school sports, mainly recreationally, but feels that those sports also help improve her agility, while the others prepare her for skiing by improving her strength and stamina. Anna believes that her hard work and determination have paid off and brought her to where she is now. In the past year she has overcome many challenges, but she is very proud of what she achieved, she knows she couldn’t have gotten there without them. 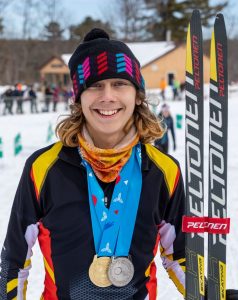 Erik has been skiing since before the age of two and has loved it ever since. He started to race competitively when he was 11. He also does other sports competitively like hockey and long-distance running. Through hockey Erik likes to build his strength, speed, and agility. In distance running, he works thoroughly on his stamina and will power. He sees both these sports helping him in skiing. For his school, Erik plays also other sports while looking for fun, stress relief or just a break from his main sports. He believes that his determination to exceed expectations, and to be the best that he can, has brought him to where he is today, and hopefully, it will take him even further tomorrow. 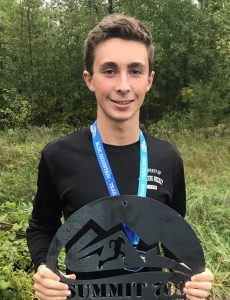 Jack skis since the winter of grade 10 when he was 15 years old. However, as an excellent runner his focus has been to build strength, coordination and balance through skiing to compliment other sports he does. As well, to have fun and get outside more in the winter months. He competes in many other sports such as running and hockey to stay physically fit and push himself to the next level. He participates in many school sports to collaborate with others and teach younger students’ skills and techniques to improve themselves and the team. Jack is always looking for opportunities to athletically better himself and be the best he can be. 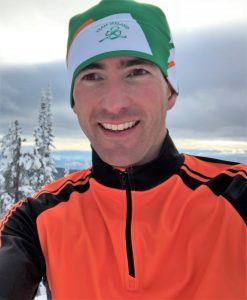 Jan grew up participating in many sports recreationally (hockey, soccer, basketball, swimming) and enjoyed many outdoor activities (hiking, climbing, canoeing, kayaking). His mother taught him to cross country ski when he was just 2 years old. When he enrolled at McGill University in 2005, cross country skiing took over his life. In 2010 he met coach Petr Jakl in Ottawa and finally began training seriously. He has represented Ireland at the 2014 Winter Olympics, and 2015, 2017 and 2019 World Championships. Despite his retirement from international competition this season his plan is to never stop skiing!

…and more about Jan